Aurebesh is based on the legendary Star Wars “Galactic Standard” typeface. This version of the font is based on the old RPG version from West End Games and includes all […]

Betazed is a fan-commissioned font to give a written-form to the Betazed language as used in Star Trek: The Next Generation. Includes a full alphabet and 10-digit numerical system based […]

Cyrillian is a ‘tech manual’ style version of the classic Russian Cyrillic lettering. It is designed as a ‘letter-replacement’ code-font, with letter glyphs lined up to their closest English equivalents. […]

This collection is an archive of Jim Sorenson’s symbol fonts based on writing found in Robotech and Transformers. The fonts include “Ancient Autobot”, “Decepticon Graffiti”, “Golden Disk”, “Maximal”, “Predacon”,  and […] 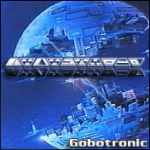 Based on a design from Jim Sorenson, Gobotronic is a symbolic interpretation of the language of Hanna-Barbera’s own take on robots in disguise. Includes full alphabet, designed to be used by […]

Graalen is an alternative alien-language font for Star Trek’s Andorian race as found in the Last Unicorn Game’s version of the Star Trek role-playing game, slightly edited for greater internal […]

Green Martian is an alien-glyph typeface based on the ‘alien’ writing (usually Martian) found within DC comics over the years. Includes most common glyph mappings and accepted characters.

Kentaurus is a ‘tech manual’ style version of the classic Greek lettering, based on the Tech Manual’s Kentaurus colony writing. It is designed as a ‘letter-replacement’ code-font, with letter glyphs […]

Modern Cybertronic is a ‘tech manual’ style, display-friendly version of the Ancient Autobot script found within some episodes of the classic Transformers television series from Hasbro and Sunbow, Inc. Includes […]