Adventure is a pulpy, decorative font is based on the main logo of the Indiana Jones (Raiders of the Lost Ark) franchise. Includes outlines version. Adventure Subtitles is based on the secondary […]

Blofeld is a distressed, angular font which is based on the title logo of Exile’s cult-classic Evil Genius and Evil Genius: Online computer games. Includes full alphabet, extended punctuation and Euro. Includes italic […] 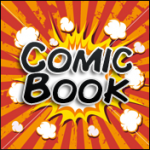 Comic Book is one of my first ‘scan and build’ fonts but I unfortunately don’t remember which comic book page I used to start work on it. It is designed to […]

Crystal deco is an art-deco typeface originally made for a series of ‘pulp’ RPG adventures. This is based on the logo for much of the merchandising for “Indiana Jones and […]

Empanada is a simple, bold typeface with some rounded edges. This is based on the lettering found in a number of ‘family-owned’ Mexican restaurants. Includes full alphabet, extended punctuation, Euro. […]

Equestria is an irregular, irreverent typeface heavily inspired by the package and character logos for Hasbro’s My Little Pony line. Includes full alphabet, extended characters and punctuation, and Euro. Comes with […]

This art-deco font is based loosely on the classic ‘futuristic-looking’ typefaces of the late 1950s and early 1960s, though a bit cleaner and more suitable for print. Includes full alphabet, […]

Gotham Nights is a tall, thin typeface heavily inspired on the lettering used in the classic Batman: The Animated Series for episode titles and other sundry. Font includes complete alphabet […]